Due to the fact that the business cooperation between Norway and the Czech Republic has expanded significantly over the last few years, the number of trucks going to Norway has increased also. As most of the goods are transported by road, the Norwegian authorities consider it important to inform hauliers about different traffic and climatic conditions that prevail in Norway, especially in winter.

There are regulations in force for tyres and snow chains, the breach of which is punished with high fines by the Norwegian police. For those who are not fond or studying laws and regulations, the Norwegian Public Roads Administration has issued a brochure called Donna Diesel that has a document in the form of a comic, which informs drivers about most of the complications that they can come across when driving in Norway. The brochure has been issued in several European languages and it is available free of charge, for example on ferryboats or at highway rest areas and it can also be downloaded from the project's website.

The TTV drivers are ready

As a Scandinavia specialist, TTV Transport has 10 vehicles reserved for transportation to Norway that have been specially modified and equipped in accordance with the regulations of the Norway that are currently in force. Furthermore, our chosen drivers undertake special annual training.

The training consists especially of practical tests in the fitting of different types of snow chains on our simulator. TTV puts great emphasis on the technical preparation of our drivers as fitting snow chains correctly in the dark and in areas where temperatures can fall deep below the freezing point, is very demanding. 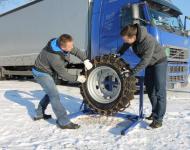 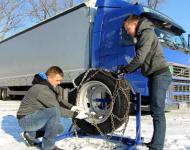 The main rule of safe road transportation in Norway is sufficient vehicle protection against slipping from the road – chains must be mounted before driving on hills otherwise snow could melt below the heated tyres and the vehicle might start to slip, which is a common cause of traffic accidents. The chains are fastened to tyres that must have a minimal tread depth of 5 mm in accordance with regulations. Tyres that are made especially for Norwegian winter are labeled with M+S and a snowflake and they must be placed on all axles of the vehicle. 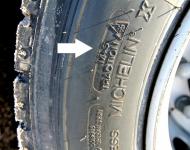 During the winter period (from October 1st to May 1st) all our Norwegian sets over 3.5 t must be equipped with at least 7 snow chains:
• 2x special traction chains with spikes that are mounted on the tractor's driving axle
• 2x extra traction chains with spikes
• 1x snow chain for trucks that is fitted on the front left or right axle of the tractor
• 2x snow chains for trucks that are fitted on the trailer crosswise – e.g. on the front right and rear left wheel 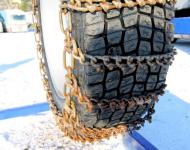 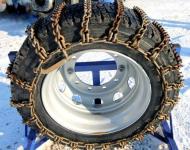 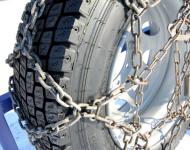 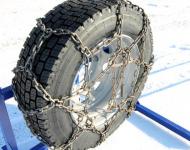 The Norwegian equipment does not apply only to tyres and chains, but also to the internal equipment of a vehicle. Due to adverse weather conditions the probability that drivers will get stuck e.g. in a tailback or at an emergency parking lot is much higher in Norway. For that reason sufficient supplies of fuel and service fluids specially treated for temperatures going down to -50 °C must always be present in the vehicle. For these harsh conditions, our drivers are equipped with special thermally insulated clothing with reflective elements. 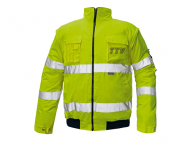 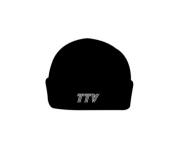 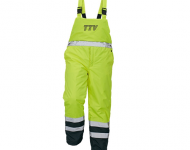 Our company has transported loads over the Northern Arctic Circle, where the drivers sometimes have to drive for several days. Vehicles for those long routes to Norway must be in perfect technical condition and drivers are selected based on many years of experience and according to their ability to cope with unexpected situations. 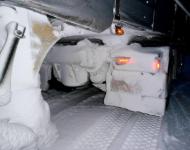 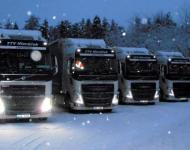